Natural Treatment for Scoliosis - Curvature of the Spine 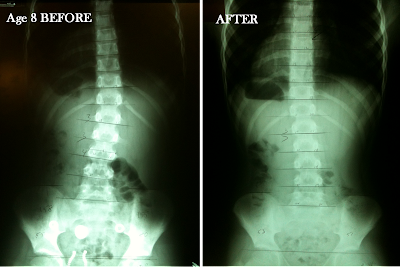 CASE STUDY: A little eight year old girl was complaining of severe back pain. As you can see by looking at the "before" picture her spine was very curved and was pinching on the nerves and causing painful muscle strain. Dr. Tevel was able to gently manipulate her back and re-align the spine. After one month of regular care her spine is nice and straight. She feels great! Left untreated it would have gotten progressively worse. By being proactive she was able to avoid invasive and uncomfortable treatment such as unattractive braces or Harrington Rod Surgery. If you are in the Thousand Oaks area and are concerned about back pain in yourself or your child please call Dr. Tevel's office for a no charge consultation: 805-496-4532.
Exciting new informations from the Mayo Clinic:
Scoliosis and Chiropractic Care

The average reduction of thoraco-lumbar scoliosis was 17.2° and was maintained for 24 months.

Function improved 70% and pain was reduced by 60%.

According to the Mayo Clinic (2009), " Scoliosis is a sideways curvature of the spine that occurs most often during the growth spurt just before puberty. While scoliosis can be caused by conditions such as cerebral palsy and muscular dystrophy, the cause of most scoliosis is unknown. Most cases of scoliosis are mild, but severe scoliosis can be disabling. An especially severe spinal curve can reduce the amount of space within the chest, making it difficult for the lungs to function properly. Children who have mild scoliosis are monitored closely, usually with X-rays, to see if the curve is getting worse. In many cases, no treatment is necessary. Some children will need to wear a brace to stop the curve from worsening. Others may need surgery to straighten severe cases of scoliosis" (http://www.mayoclinic.com/health/scoliosis/DS00194). They go on to say that signs and symptoms of scoliosis may include, uneven shoulders, "Signs and symptoms of scoliosis may include: uneven shoulders, one shoulder blade that appears more prominent than the other, uneven waist, [and] one hip higher than the other" (Mayo Clinic Staff, 2009, http://www.mayoclinic.com/health/scoliosis/ DS00194/ DSECTION=symptoms).

"If a scoliosis curve gets worse, the spine will also rotate or twist, in addition to curving side to side. This causes the ribs on one side of the body to stick out farther than on the other side. Severe scoliosis can cause back pain and difficulty breathing. Go to your doctor if you notice signs or symptoms of scoliosis in your child. Mild curves can develop without the parent or child knowing it because they appear gradually and usually don't cause pain" (Mayo Clinic Staff, 2009, http://www.mayoclinic.com/health/ scoliosis/DS00194/ DSECTION=symptoms).

According to Lou et al. in 2010, three-dimensional lateral curvatures of the spine affect 2-3% of the adolescent population. According to ACT Youth who utilizes the 2000 US Census Bureau statistics, the number of adolescents in the United States is 41,747, 962. Averaging 2.5% of all adolescents having scoliosis equates to 1,043, 699 children facing issues as result of scoliosis. Lou et al. (2010) continue, "Brace (orthotic) treatment is recommended for growing children with curves of 25–45° Cobb angle. Surgery is the final treatment option for curves greater than 45° and its goals are to obtain safe correction, to produce a solid spinal fusion of the curve region, and to bring the spine and body into a more balanced position (p. 292). However, they conclude, " Although brace treatment for scoliosis has been used for more than fifty years, its effectiveness is still debatable... Most studies used the amount of curve progression (as measured by the Cobb angle) to determine the effectiveness of brace treatment. Some defined success as 5° or less curve progression" (Lou et al., 2010, p. 292).

While allopathic medicine is still entrenched in the debatable practice of bracing and eventually surgery with the eventual progression of scoliosis, there are proven solutions. Morningstar concluded in 2011 that as a result of chiropractic spinal adjusting and chiropractic spinal manipulation, a thoracolumbar curvature (scoliosis) averaged a 17.2° reduction that was maintained for 24 months, the length of the study. Across all spinal groups, an average of 10° reduction was realized that persisted for 24 months, again the length of the study. Morningstar also concluded that pain scales reduced by 60% at 24 months and function improved by 70% while respiratory capacity increased 7%. Although this was a limited study with 28 patients, it is the first scientific conclusion that documents and reflects the results of what chiropractors have been realizing in their offices for over a 100 years.

The real issue is that if adolescents have their curvatures reduced by 10°-17.2°, then bracing and surgery are not an option because they will not be indicated. As bracing has been deemed "highly questionable" in the literature and now the literature reflects chiropractic as a highly effective modality, the standard of care across professions should be chiropractic care for scoliosis as first line treatment and should be standardized in every discipline.